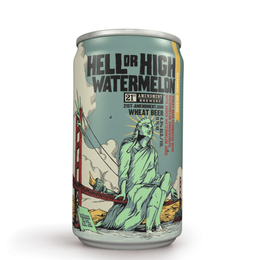 Good Buy: Ripe for the Sipping

Sweet lady liberty
San Francisco’s 21st Amendment Brewery helped to launch the American fruit beer craze with their wheat brew Hell or High Watermelon, which is brewed with fresh watermelon and mildly hopped to really bring out the fruit flavors. The result? A sweet summer sip that really beats the heat.
$10 for a six-pack at Medford Wine & Spirits, 175 Route 70, Medford, (609) 953-8773

Pineapple express
Every bottle in Evil Genius Beer Company’s lineup is a tribute to a hit movie or television show, and their I Love Lamp pineapple hefeweizen is no exception. The tart pineapple flavors added into the mix combine with lightly roasted Munich malt and wheat leads to a crisp, refreshing brew that even Ron Burgundy would love.
$10.99 for a sixpack at Wegmans Wine, Liquor & Beer, 2 Centerton Road, Mount Laurel, (856) 439-5599, Wegmans.com

Straight from the source
Pescado Dorado is one of Flying Fish Brewing Co.’s newer varieties, a Belgian-style golden ale that gets elevated with apricots and saffron. After brewing, the beer is aged in oak barrels previously used to make 100 percent agave tequila, which contribute an added bit of color, kick and flavor. Flying Fish has earned a reputation for their cask conditioned beers, and this bottle is following that trend.
$10.99 for a 750mL bottle at Flying Fish Brewing Co., 900 Kennedy Blvd., Somerdale, (856) 504-3442, FlyingFish.com

Hopping to it
Flying Dog Brewery’s Bloodline Blood Orange IPA burst onto the craft beer scene as a limited release in 2013, and people loved it so much that is has since become a brewery standard every summer. This India Pale Ale features plenty of—you guessed it—blood orange fruit, along with three different breeds of American hops to create a fruity-but-bitter blend tha doesn’t lean too far on the sweet side.
$10.99 for a six-pack at Maro Brothers Discount Liquor, 1500 Route 38, Hainesport, (609) 518-1000, MaroBrothers.net

In season
Pink isn’t just for girls, especially when Yards Brewing Company across the bridge in Philadelphia puts their spin on it. Each batch of their PYNK Berry Ale is brewed with 3,300 pounds of cherries—both sour and sweet—which contribute to its bubbly pink color. Better yet, five cents from every PYNK is donated to help the Tyanna Foundation for breast cancer research and awareness.
$10.49 for a six-pack at Hops & Grapes, 810 Delsea Drive, Glassboro, (856) 582-8110 HopsAndGrapesOnline.com

Feeling fruity
When it comes to Belgian beers, few American breweries do it better than The Bruery. Their seasonal releases are sought after and their sours are just as well known, like this Terreux Beret, a sour that is blended with bright raspberries and aged in a massive foeder barrel of American oak. It’s a perfect blend of berry and wheat, with just the right sour kick.
$16.99 for a 750mL bottle at Total Wine & More, 2100 Route 38, Cherry Hill, (856) 667-7100, TotalWine.com

Gone fishin’
All of Ballast Point Brewing Company’s beers have a fishy theme to their names, but don’t worry, you won’t find any fish flavors in their Grapefruit Sculpin IPA. A twist on their Sculpin series of beers, the acidic grapefruit flavors pair nicely with their five rounds of citrus hop additions. And if you like this version, you’ll love their other summer Sculpin featuring pineapple.
$13.99 for a six-pack at Traino’s Wine & Spirits, 100 Church Road, Marlton, (856) 983-0056, TrainosWine.com

Southern charm
We may not have prickly pear on the East Coast, but it’s a fruity favorite in Shiner Beer’s home state of Texas. Shiner’s Prickly Pear is a light and easy drinking summer seasonal that’s perfect for people new to the craft beer craze, brewed with the fruit of Texas’ Opuntia cactus. Its low ABV and effervescence mean you can drink this beer all day and well into the evening.
$15 for a 12-pack at Roger Wilco, 1001 Route 73, Pennsauken, (856) 665-3456, RogerWilcoNJ.com

Bleeding heart
Dogfish Head Craft Brewery has long been praised for their IPAs. The early crowds are flipping for their newest brew, Flesh & Blood IPA, which uses blood orange juice and the flesh of fresh lemons to come up with their unique bottle name as well as their bittersweet flavor. Keep your eye out for Flesh & Blood cans to come at the end of the summer as well.
$13.99 for a sixpack at Cook’s Liquors, 26 Haddon Ave., Westmont, (856) 854-5675

To see our gallery of this month’s Good Buy photos, click here.