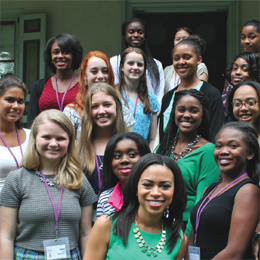 This summer, while some kids headed off to sleep away camp or spent time hanging out at the Shore, a group of local teenage girls set their sights on Mount Laurel. It’s where they’ll spend a handful of their summer days at the Alice Paul Institute, writing speeches and résumés, working with teammates to create online campaigns, networking, and studying business etiquette.

It’s not your typical way to spend a summer, but South Jersey girls are searching out leadership programs, and the Alice Paul Institute has created a year-long system of programs to provide girls with just that. It’s part of a growing trend of modern-day feminism, teaching young women to embrace their ability to lead from a young age to inspire generations of budding businesswomen, politicians, engineers and more.

The Alice Paul Institute has long been a part of the community, honoring Mount Laurel native and Suffragette Alice Paul out of her childhood home, Paulsdale. But their work with girls in the community began in the early ’90s before the building had been renovated and ready for use.

“This organization always tried to run before it could walk,” laughs Lucienne “Lucy” Beard, executive director of the Alice Paul Institute. Beard says that the Institute sensed the need to start helping local girls after a series of studies and books were published that revealed the drop-off rate of confidence and leadership in girls during puberty.

“They found that when a girl hits puberty their confidence goes down, their performance in school goes down, they no longer see themselves as leaders,” Beard says. “There was a growing feeling that we needed to focus on girls in middle school, to catch them before they fall off the grid. We wanted to connect them to women as leaders and to teach leadership through role models.”

This need launched the Institute’s Girls Leadership Program in 1994, the basis for what has evolved into a series of programs, committees and more aimed at helping girls reach their potential before college. “We wanted to make this place a living legacy for Alice Paul, which is why we decided to focus on girls’ leadership,” says Beard. “We teach leadership through role models. Alice Paul is our initial leader, but think about when you’re a kid: You learned leadership through George Washington, Benjamin Franklin. There wasn’t a contingent of leaders that were women that were being taught about in schools.”

The program set out to change that, introducing girls to historical female leaders like Paul, Eleanor Roosevelt, and civil rights activist and co-founder of the United Farm Workers Association Dolores Huerta, while connecting them with local businesswomen and influential leaders like Senator Diane Allen and more.

That group grew into in-school programs that are still in operation, followed by the Girls Advisory Council, a yearlong organization run by high school girls. What started as seven girls has grown into a group of 48 high schoolers, who meet and work together to enhance their leadership skills, while learning about important issues concerning women internationally and working as activists to promote their causes. The girls practice public speaking, write and campaign and break out of the mold that they might have developed through years of school and gender stereotypes.

“Every girl gets intensive public speaking training,” explains Beard. “They work on shaking hands, con- ducting themselves at a cocktail hour or in a meeting. They get training on how to network and how to work a room.”

The year ends with the Alice Paul Equality Awards, organized and run by the girls.

“Every person in the room is amazed by how the girls conduct themselves. During dinner each girl sits at a table and they prepare remarks to share with the adults at their tables. Some of them have made real connections with their honorees. These girls might not have been able to put a sentence together a year or two ago and walk confidently into a room and can speak to anyone,” Beard says.

“A girl can sit next to a confident, outgoing girl in this group where she might never do otherwise. We have girls from all these different schools together in one place, and they never meet otherwise unless it’s in a competitive situation. They tell us they’re motivated to come here because they believe that women and men should be equal, and its stuff they can’t talk about at school, even with friends. For the first time in their lives they’re making friends by choice and by common interest, not by location.”

For 18-year-old Chloe Carr, the year she spent with the Girls Advisory Council helped the Lenape graduate prepare to study film at the University of the Arts in Philadelphia. “It feels like I’ve been there for longer because it’s such a tight-knit group and I’ve learned so much from it,” she says.

“I was looking for new experiences and a way to improve my communication skills and my confidence,” Carr says. “I was struggling a lot with that as a junior, and I want to be a film major, so I wanted to learn how to communicate properly.

“I have so many memorable experiences. We took a trip to the United Nations—we went up to New York City in the fall and I made a short video for the Girls Advisory Council and they ended up showing that at the U.N. It changed me, knowing my work was shown at the United Nations. And I was surrounded by all these really important people and also by other girls that were just like me. It made me realize that I was capable of doing some really cool, really important things in my life.”

The summer is a busy season for the Alice Paul Institute, as registration for the Girls Advisory Council begins at the same time as their summer programs, which extend into the community. Lead-A-Way was developed for girls ages 11 to 18, as a way to build team-building skills, communication and integrity. Held in two separate weeks in August, the girls meet at Rowan College of Burlington County and build up their potential as leaders in the community.

“We’ll talk about leadership skills to find out what they view as a leader,” says Beard. “In the beginning they’ll think it’s a diva, or someone that’s popular. So we teach them about the responsibility that comes with leadership, and we redefine the definition of leadership.”

The Alice Paul Professional Leadership Institute—or APPLI—is a relatively new program at the nonprofit, where girls practice interview skills, tour college campuses and do more to learn how to progress their futures independently.

“The APPLI program is totally unique,” explains Beard. “The girls learn early professional development skills through talking to women about the workplace, and we are also teaching them to be a critical con- sumer of the college education experience. It’s not about the school name, it’s about what is the best fit for your situation by discussing college debt, location and things they might have never considered.