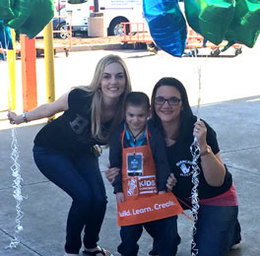 Biancaâs Kids turns a tragic loss into hope for thousands of children in need.

Experiencing the sudden loss of a loved one can raise more questions than answers, leaving many to wonder how they can ever recover from such a tragedy. That was the question on the mind of Williamstownâs Debbie Savigliano when she lost her niece in 2010.

Bianca Yodice was just 21 years old when she was struck and killed while crossing a busy highway in Edison on her way to work at a daycare center. Savigliano says Yodice had a passion for working with children and wanted to pursue it as a career after college. âShe cared for all children and had a special interest in helping children with separation anxiety. She knew how to make them feel safe,â Savigliano says.

Inspired by her nieceâs passion for children and motivated by her grief, Savigliano decided to take this sad event and turn it into something positive for others. âI wanted her name to be associated with something besides the accident, a way to celebrate the girl who loved kids,â she says. Later that year, Savigliano joined with family members Vanessa Andricola and Gabriella Michael to found Biancaâs Kids, an organization that grants wishes to children in South Jersey and beyond.

âIn the beginning, we used our relationships with resource development offices to help children in need receive Christmas gifts, things they really wanted,â says Savigliano. âThe first year, we provided for 120 children; the second year it was 1,200. Eventually, it evolved from Christmas gifts to prom dresses, Easter baskets and granting wishes.â

To date, Biancaâs Kids has helped over 12,000 children in and around New Jersey. They have been recognized as a 2015 top-rated nonprofit by GreatNonprofits.org, which is based solely on user reviews.

No matter the size of the wish, Biancaâs Kids does their best to grant it. âEvery child wants something different,â Savigliano says. âSometimes itâs as small as uniforms for school, or an iPad to keep them entertained during chemotherapy treatments.â

All wishes are reviewed by Savigliano and the board of Biancaâs Kids. âWe look at every aspect of their need, their circumstances, the financial need,â she says. âWe donât wait for a child to be dying to grant a wish.â

Wishes have included celebrity meet and greets, providing school supplies, bikes for kids battling cancer, and even a prom for a girl named Tiffany, for whom Biancaâs Kids provided the dress, wig, makeup and transportation. Sadly, Tiffany passed a few weeks after having her wish granted.

One of the most impactful wishes granted by Biancaâs Kids involved the family of 12-year-old Autumn Pasquale, who was murdered in 2012. Biancaâs Kids assisted the family by helping to organize volunteers to search for Pasquale, raising money for the Autumn Pasquale Memorial Fund, providing all of the Christmas gifts on Pasqualeâs siblingsâ lists, and later sent A.J. Pasquale to spend a day at Eagles training camp and Natalie Pasquale to a Justin Bieber concert.

Savigliano says Anthony Pasquale, Autumnâs father, and his children made a wish to Biancaâs Kids to have the park Autumn frequented renamed in her memory. Biancaâs Kids granted that wish and on the one-year anniversary of Autumnâs death, conducted a dedication ceremony of the new Autumn Pasquale Memorial Park.

Biancaâs Kids often relies on its hometown connections to support the wishes it receives. âWe have vendors who have offered their services for free if a wish comes in that suits them,â Savigliano says. âWe have a gym vendor who has offered free cheerleading classes, and an auto body shop that will fix cars. ... Itâs great to have those connections because we know we can immediately grant those wishes.â

Savigliano says the organization is always looking for vendor partners who can give their time or offer a service. âNo matter who you are or what you do, there are ways to help. You could tutor for free, provide manicures for foster children going to prom,â she says. âEveryone in this life has an opportunity to become someoneâs hero.â

Biancaâs Kids is a volunteer organization and receives no government grants. Board members make time for the organization in between raising families, working or going to school.

âWe raise donations one dollar at a time all through private donations, and every dollar goes to the children,â says Savigliano, a fact she publicizes on their website. âI want our supporters to feel confident in where their money is going. Through our website and Facebook page weâre able to share the wishes weâre granting so donors can see their donation dollars at work.â

Savigliano doesnât think about how much money is being raised on a daily basis. âWe donât set any minimum goals. We feel the numbers that matter are the number of lives we touch, the number of kids we can bring joy to,â she says.

Now, the organization has an opportunity to reach a wider audience and share its mission. Recently, Biancaâs Kids was offered its own 30-minute weekly talk show on RadioVisionNetwork.com. Episodes are available via streaming video or podcast. Savigliano says the talk show is a chance to tell the stories of the wishes Biancaâs Kids has granted and how their lives have changed because of it. The first episodeâs guest was Anthony Pasquale. For an idea that came about over a single text message between family, Savigliano says she never would have dreamed Biancaâs Kids would become what it is today.

âWhen you lose someone in the manner we lost Biancaâa vibrant, healthy 21-year-old who was just walking to workâyour life changes,â she says. âFew things can pull you from that abyss of grief. It would be easy to live an angry and painful life. Sheâs never coming back and there is a hole in my heart, but with every wish we grant, that hole fills up a little bit, healing more and more. There is euphoria in creating hope for others, and I hope through our work we inspire others to find healing.â