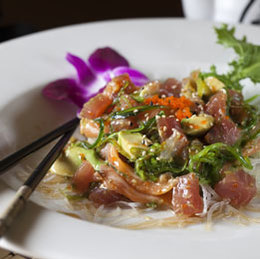 
by edited by Erica Bauwens

Umi Sushi
Somerdale
Guard your treasureâthis plate is one you wonât want to share. White fish, fresh tuna and salmon get diced into nibble-sized cubes and marinated in sonomono sauce, then tossed with fresh lemon, seaweed and chopped avocado. Each bite practically melts in your mouth, and the fatty, acidic and salty flavors are hard to forget.

Key Ingredient: Pears
Summer isnât completely over, so save your apples for next season. Weâre sticking with pearsâa milder, brighter flavor that keeps us feeling the spirit of the season. Check out these pear dishes and drinks for some inspiration.

Lunch Under $15: Stokes Road in Medford
Looking for a quick lunch escape that wonât eat up your bank account? Take a drive down Medfordâs Stokes Road. Thereâs more than enough variety to break up your day and leave you feeling satisfied and ready to tackle the afternoon shift.

?Chicken Delight
Looking for something light? Try this salad topped with grilled, marinated chicken, crumbles of cottage cheese and chunks of fruit, all drizzled with pineapple dressing. $8.95 at L. B. Daniels, 640 Stokes Road

? Filet Mignon Sandwich
Your typical steak sandwich gets taken to the next level with two slices of tender filet mignon, pepper crusted and served on a toasted garlic roll and served with chips. $14.99 at Ottâs, 656 Stokes Road

? Sushi Lunch Box
Take your pick between sushi or sashimi, which gets paired up in a lunch box complete with miso soup, fresh salad, an additional California roll and your choice of gyoza or shumai. $10.95 at Kanamizu, 560 Stokes Road

? Grilled Cheese
This sandwich gets a grown-up makeover thanks to the additions of sharp gruyere and chevreâor goat cheese. The ooey, gooey cheeses are nestled between roasted tomato and Dijon mustard, and you can add Applewood smoked bacon or avocado for some added protein. $7 at Zinc CafÃ©, 679 Stokes Rd. âBrianna Howarth

Brewer Eli Facchineiâwho helped spark interest in a brewery in Collingswood earlier this yearâhas begun work on his Oaklyn microbrewery. Tonewood Brewing is expected to open its doors in May 2016.

Iconic Philadelphia bakery Amorosoâs Baking Company has announced plans to close their city location and re-open in Bellmawr, teaming up with Ginsburg Bakery Inc.âoriginally out of Atlantic Cityâon a new company called 151 Foods. The partnership was obtained with the help of $20.7 million in Grow New Jersey tax incentives over the next 10 years.

Sabrinaâs CafÃ©âthe formerly all Philadelphia-based dinerâhas announced that they will move their business headquarters down the street from their future location in Collingswood. The headquarters will open up at The Factory on Fern Avenue.

Extra Plate: Bricco Bricco may be new to Haddon Township, but itâs already making a name for itself. Itâs a small space, but thereâs plenty of room for a crowd, with booths lining the walls and tables constantly full of BYOB diners. Youâre instantly greeted by the coal fired oven when you walk in, a bustling, glass-enclosed space where cooks are throwing pizzas and watching the flames. Other attendants, meanwhile, are constantly watching the oven itself, rushing back and forth with pallets of aged pizza dough or more wood to keep it at 1,000 degrees throughout the evening.

Itâs a lot of work for a simple pizza pie, but the results are worth it. These flash-baked pies come out crispy on the outside, soft on the inside, with a truly addicting crust that highlights the kitchenâs hard work. Classic pies come with a variety of hearty toppings like the Rabe, which gets dressed withâyou guessed itâbroccoli rabe, garlic and sweet Italian sausage and finished with smoked mozzarella. Itâs a garlic-loverâs dream, with so much fresh flavor from the broccoli rabe and a burst of salty flavor from the crumbled sausage. Meanwhile, the Tratto pie piles Parma ham, eggplant, oven-dried tomatoes and more smoked mozzarella together for a more rusticâbut equally as appealingâpie.

But thereâs more than just quality artisan pizzas here. Itâs a crime to overlook their coal-fired chicken wings. Ten perfectly portioned wings get tossed in rosemary and olive oil, seasoned with salt and pepper and roasted with sliced sweet onions. Theyâre meaty and smoky, and the onions are good enough to eat on their own. Salads are a meal in themselves, like the Market variety which mixes al dente orzo with Bibb lettuce, sliced chicken breast, oven-dried tomatoes, mozzarella and roasted peppers before tossing everything with white balsamic vinaigrette made in-house. Portions are big enough for sharing pre-pizza or digging into as an entrÃ©e and stand out as an extra reason to stop into this up-and-coming Westmont hot spot.