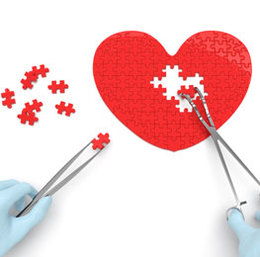 Taking Care of Your Ticker

When the health of your eyes, ears or teeth starts to deteriorate, itâs immediately noticeable, resulting in the prescription on your glasses being made stronger, the volume on your TV turned a little louder, and teeth cleaned more often. But how noticeable would something like heart disease be? Some habitsâlike diet and smokingâcan clearly impact your risk, while othersâlike geneticsâarenât so obvious. According to the U.S. Centers for Disease Control and Prevention (CDC), two-thirds of women who die suddenly from heart disease show no previous symptoms, earning it the moniker âsilent killer.â The most common formâcoronary heart diseaseâcosts the country $108.9 billion annually in health care services, medications and lost productivity.

Heart disease remains the No. 1 cause of death in both men and women, but a recent study at the CDC also found that overall death rate from heart disease dropped almost 4 percent each year from 2000-2010. Itâs encouraging news, and several factors have attributed to the decline.

Knowing Your Risk
Public awareness of cardiovascular disease is one of the leading causes of the decline. âOverall, there has been a greater focus on public education and awareness about the importance of living a heart healthy lifestyle,â says Dr. Talya Spivack, a cardiologist at Virtua. âEducation is key because itâs important to know the choices we make can impact our future and health tomorrow.â

According to the CDC, 49 percent of Americans have at least one of these risk factors: high blood pressure, high LDL cholesterol and smoking. Medications are available to treat these conditions, but patients can change their behavior, too.

Dr. Spivack says adopting positive lifestyle habits is one of the first steps she encourages patients to take, whether they have experienced a heart attack or stroke or are at risk for one. âI encourage them to get active, stop smoking, control their blood pressure, blood sugar, cholesterol and weight, in addition to following a healthy diet,â she says. âA healthy diet means a nutritious diet rich in vegetables, fruit, low-fat dairy, fiber-rich whole grains and lean meats, particularly fish twice a week.â

When it comes to unmodifiable risk factors, like age, sex and genetics, vigilance is going to make the difference in prevention. For example, family history is something that canât be modified. âFamily history is considered important if a male relative with cardiovascular disease suffered from an event before age 55, and if a female relative suffered their event before age 65,â says Dr. Spivack.

Dr. Harvey Waxman, chief of cardiology at University of Pennsylvania Presbyterian Medical Center, says genetic testing is something exciting for the field. âThese tests arenât ready for prime time, but we can assess why someone is high risk even if they are healthy, exercise and eat well; and conversely look at their risk if they choose not to do any of those lifestyle changes. We can dig deeper and look at more sophisticated reasons why someone gets the disease,â Dr. Waxman says.

While there is currently genetic testing for cancer genes, Dr. Phil Koren, deputy medical director at the Cooper Heart Institute, says itâs not quite there yet for heart disease. But it is where the future lies, he notes. âThere is phenomenal potential for understanding a personâs genetic makeup to help us guide treatments and decide which patients we need to be most aggressive with.â

Technology And Treatment
As patients become more aware of their risks, available treatment and the use of technology are also advancing.

For starters, when a doctor suspects a blockage or sign of heart disease in a patient, typical cardiac tests might include an electrocardiogram (sometimes called a stress test), an echocardiogram (a noninvasive ultrasound of the chest), a CT scan and even an MRI. Since itâs often a long process, patients can be deterred from getting checked.

According to Dr. David Roberts, director of cardiovascular imaging at South Jersey Radiology Associates, new technology has come to the forefront in the past 10 years that is more accurate and less invasive. âComputed Tomography Angiography, or CTA, is one of the more powerful methods of detecting coronary artery disease,â he says. âUnlike a stress test, this shows in high resolution directly to the physician whether the blood vessels are narrowed, secluded or normal.â

Dr. Roberts says this technology could be used for early detection. âWe can put them on the scanner, do the CTA and tell them how much plaque burden they have, if there is calcification, are there blockages. This way we can see where they stand and give them the right instruction to act on it, whether itâs lifestyle changes or treatment with drugs. In the future, access to things like the CTA only serves to increase patient compliance and make them more likely to get checked.â

Stents, which have long been used to treat narrowing arteries, have also progressed. âThe penetration of drug-eluting stents on the market has been a major factor for people living longer after a heart event,â says Dr. Koren. âDrug-eluting stents are coated with medicine that prevents scar tissue from growing into the artery, and we rarely see narrowing when these are in place.â

For those who do need surgery, many heath care centers of excellence are now performing minimally invasive heart surgery, which has advantages to open-chest procedures. Dr. Atiq Rehman, who specializes in thoracic surgery at Our Lady of Lourdes Medical Center, says, âWhen new treatments come around, the goal is always to have their outcomes match the standard of care achieved with conventional treatments. Thus minimally invasive robotic heart surgery is comparable to open heart surgery, but has lesser recovery time.â

Dr. Rehman says transcatheter valve therapies are also going to play a major role in treating cardiac disease. âItâs available for high-risk patients and only performed in specific centers of excellence. But in the next three years, I see it becoming available for those with moderate or low risk as well.â

A large percentage of patients seeking therapy at Marlton Rehabilitation Hospital have suffered from a stroke, according to Manager of Outpatient Rehabilitation Services Ken Turley. âThose who have had a stroke may suffer deficits in mobility, as well as cognitive, speech and swallowing difficulties,â he says.

One method of treatment that Turley usesâwhile not brand newâis neuromuscular electrical stimulation. âIt can aid in the contraction of the muscle and help strengthen it after prolonged periods of inactivity,â he says. âNew technology has made this type of treatment wireless and functional for a person to use at home as well.â

No matter what level of risk someone has, or if they have suffered a heart attack or stroke previously, Dr. Waxman highlights an important fact. âWith matters of the heart, so much of preventing it is in the individualâs own control. You really can make a difference in your own future if you take care of yourself.â