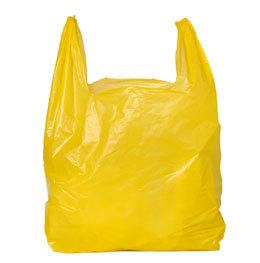 In The News: A Bag Idea

If some lawmakers get their wish, a trip to the grocery store could cost you even more.

Banning plastic shopping bags is a trend that’s swept the country in recent years. San Francisco became the first major U.S. city to ban plastic bags in 2007 with the entire state of California following suit in October 2014. The landmark decision gives shoppers the option to bring their own bag, buy a reusable bag or pay a fee for each recycled paper bag they leave the store with. Seattle, Chicago, Portland, Ore., and Austin, Texas, have also adopted plastic bag bans.

Is New Jersey the next to get in line? Well, not just yet.

A referendum to make a plastic bag ban a reality in Mercer County had strong support from several officials, and was viewed as a stepping stone to a larger push for a statewide ban, something that has been part of various proposed legislation since 2008. The fact it made it onto a ballot was considered a step forward.

But on Nov. 4, voters overwhelmingly rejected the referendum, known as the “Carryout Bag Reduction and Recycling Act.” The measure was voted down by 61 percent of Mercer County voters. With 98 percent of the polling places in the county reporting, the measure failed by a vote of 39,314 to 24,596.

The referendum suggested that the state of New Jersey should require stores to impose a fee for the use of carryout bags, allow stores to provide a credit for each bag provided by the customer and require disposable carryout bags to be made of recyclable plastic or paper. Senators Bob Smith, Jim Whelan and Linda R. Greenstein sponsored the measure.

The referendum says, “the production of plastic and paper carryout bags in the United States has significant and detrimental environmental impacts each year, using over 12 million barrels of oil, cutting down over 14 million trees, and killing thousands of marine animals through ingestion and entanglement.”

Most plastic carryout bags become toxic when biodegrading, contaminating soil and waterways, according to the referendum. The measure also says plastic and paper carryout bags take up a large volume of solid waste in landfills and endure a lengthy and labor-intensive process of re-integration and renewal, using many chemicals, intense heat and water.

Linda Doherty, president of the New Jersey Food Council, a trade association consisting of food retailers and their suppliers, believes the referendum set “a dangerous precedent with a costly impact.”

“Given the exceptional efforts of New Jersey food retailers to support green practices and implement sustainability programs, a tax on plastic bags in unnecessary,” Doherty says.

A fee limited to plastic bags would cause consumers to choose paper bags, which are four times more expensive than plastic bags, she notes. “For an industry with a 1 percent profit margin like supermarkets, every shopper counts and the lost business from customers that feel slighted by an ambiguous tax will hurt,” Doherty says.

As an alternative, she suggests grocers should focus on increasing consumer awareness about plastic bag recycling and reuse initiatives, employee training and incentives for reusing bags. “We believe positive support of existing programs is a much more agreeable solution than punitive policies that hurt food retailers and punish our N.J. customers,” Doherty says.

Several local stores, including Murphy’s Marketplace in Medford and ShopRite in Marlton declined to comment, saying only “this is an issue that affects retailers as a whole.”

Environmental activists are pushing back by emphasizing that the five-cent fee should not be referred to as a tax but as a penalty on those encouraging pollution.

“A five-cent fee for plastic shopping bags would be a penalty on those who are encouraging pollution and causing everyone to pay higher taxes considering the costs of landfills and so on,” says Jeff Tittel, director of the New Jersey Sierra Club, a non profit public interest organization that promotes conservation of the environment.

Noemi de La Puente, executive director of the New Jersey Environmental Lobby, which is one of the groups most involved with initiative NJ Think Outside the Bag, says the labeling of the five-cent fee as a “tax” was the deal breaker that caused the referendum to fail.

“People don’t want another tax,” de La Puente says. “However, it isn’t really about a proposed tax, it’s about a proposed fee,” she explains. “It’s about disrupting the American custom of getting a plastic bag, and putting a fee on a bag is the single most effective way to change consumer behavior.”

Although the measure didn’t pass, Tittel and de La Puente find comfort in knowing the referendum started the conversation about the harm of plastic bags.

“This is the first time anything like this got on the ballot in New Jersey, so it’s an important milestone,” de La Puente says. “The next step is more education, especially in the retail community. Businesses need to understand that they would gain a lot from this.”

Meanwhile, South Jersey residents are expressing a mixed bag of emotions over the issue.

Debbi Cancelliere, of Medford, says the five-cent charge for plastic bags is “a great idea given the need to be sustainable for our future.” She adds, “one would hope that the fee would be an additional measure to ensure that all people are focused on the need to recycle and thus become more eco-friendly.”

Others haven’t warmed up to the idea of being charged for something that has long been complimentary and aren’t fond of the inconvenience of having to tout around reusable bags.

Susan Dengel, of Marlton, knows California’s five-cent charge all too well, since she frequently visits her two daughters who live in L.A.

“This is in effect in West Hollywood, and I found it completely annoying,” Dengel says. “I overstuffed bags [to save the five cents] and they always broke. I know it sounds ridiculous, but it was the principle of having to pay for bags.”

Dengel’s daughters, however, have adjusted and bring reusable bags with them when they shop. She admits that their changed habits could be indicative of how New Jerseyans might respond if a measure like this was implemented close to home.

“I guess, in time, we would all be more conscientious,” Dengel says.

In the meantime, expect the debate to continue, especially if more cities and states across the country enact their own bans.