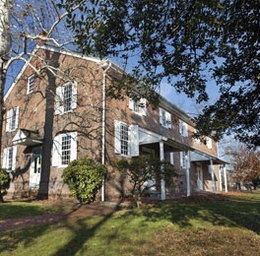 A town with deep historic roots, Mount Holly is experiencing a renaissance. Founded nearly 100 years before the American Revolution, Mount Holly has maintained the charms of classic small-town America, giving it a personality and sense of community that is hard to find these days. Itâs become a go-to destination for small businesses, with a thriving Main Street and a supportive network of business owners working together to improve the town. Thanks to recent development projects that are attracting residents, businesses and visitors, Mount Holly is successfully merging its past with a bright future.

Flourishing Arts
According to Audrey Winzinger, who serves on the Main Street Mount Holly board of directors, the artsâfrom fine arts to performing artsâin Mount Holly have always been an economic driver, especially downtown. The town currently boasts four galleries and a fifth is in the works on Mill Street. The culinary arts have been gaining footing in Mount Holly as well, thanks in part to the Culinary Arts Center at BCC, a 19,000-square-foot landmark located downtown. Winzinger says residents and businesspeople alike frequent their student-run restaurant Vaulted Cuisine for lunch and dinner served once a week.

Craft Beer Connection
Craft beer lovers from near and far have also helped put Mount Holly on the map in this discerning culture, Winzinger says. Opened in late December 2013, Village Idiot Brewing Company has sparked a following of beer drinkers and has plans to expand their hours to accommodate more visitors. The addition of Spellbound Brewing in 2014 has attracted more attention to Mount Holly and that is expected to grow as Spellbound begins canning its product, making it more widely available. âItâs amazing seeing the population of craft beer lovers we never knew were here and they are looking at Mount Holly as a town offering a good variety,â adds Winzinger.

Mill Race Village Expansion
New businesses continue to join the bevy of shops in Mount Holly that include jewelry, clothing, books, accessories, furniture and more. Winzinger says Above and Beyond Dog Training recently moved in, as well as Endless Treasures. âWe like to have a nice mix of businesses and this is a good addition for us because it is compatible with our various dog-friendly shop owners,â she says.

In late 2013, Mill Race, Inc., which is owned by the Winzinger family, purchased 65,000 square feet of vacant commercial space between Church and Monroe streets, to be named The Eagle Foundry at Mill Race Village. Winzinger says the plan is to bring in larger retailers and offer studio space. âWeâve been working with architects and engineers to make sure everything is in order, and I think weâre about a year away from occupancy.â Many Mill Race businesses are bursting at the seams in their current spaces and looking forward to the additional room the Foundry will offer, including hometown restaurant Robinâs Nest, which has plans to open a catering space there as soon as possible, she says.

West End Redevelopment Progress
After reaching a settlement in a decade-long Mount Holly Gardens lawsuit in late 2013, the town began moving forward with plans for a mixed-use development project to include homes and commercial property. Mayor Rich Difolco says he feels the plan offers what is best for the town and its residents. âThis redevelopment is part of the evolution of Mount Holly and establishing it as a destination,â he says. âVacant land is being purchased and dilapidated structures are being repurposed. Town homes and apartments are selling out and weâre still expanding with more units. This is why bringing in certain merchants is crucial because these residents are going to demand more retail and restaurants.â

Mount Holly Fire District No. 1 is the oldest continuously active volunteer fire company in the United States, dating back to 1752 when it was organized as Britannia Fire Company.

The Burlington County Lyceum of History and Natural Sciences (formerly the Mount Holly Library) was chartered by His Majesty King George III of England in 1765. The original charter document still resides inside the lyceumâs collection, which includes some 13,000 books and hundreds of artifacts.

The Battle of Iron Works Hill took place in Mount Holly on Dec. 23, 1776 and was a crucial battle in the Revolutionary War as it distracted thousands of Hessian soldiers from Trenton, where George Washington would stage The Battle of Trenton on Christmas night.

100: Quarts of chili at the 2014 chili cooking competition

45: No. of goats brought in during the summer of 2014 to eat the invasive English Ivy at The Mount off High Street

4: Acreage of space the goats will eat

$20,000: Amount of the grant from Sustainable Jersey awarded to Mount Holly for the reforestation of the Mount