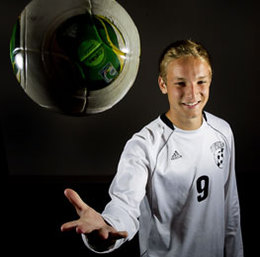 Tyreek Robinson, Moorestown football
The senior quarterback/defensive back is a star on both sides of the ball, and was first-team all-conference last year on offense.

J.T. Bretschneider, Moorestown boys soccer
One of the best goalies in the area, Bretschneider had 10 shutouts in 2012, including the South Jersey Group III final. He was named third-team all-South Jersey.

Danielle Smith, Cherokee gymnastics
A four-year gymnast, Smith has qualified for states in all three of her seasons with the Chiefs so far. Last year, she was all-South Jersey in beam.

Marissa Toci, Lenape gymnastics
Toci, a senior, was named South Jersey Gymnast of the Year last year. She was first-team all-state and was the South Jersey sectional champion.

Adonis Jennings, Timber Creek football
A senior wide receiver, Jennings helped the Chargers to their second straight South Jersey title in 2012. He has committed to Rutgers.

Christiana Ogunsami, Cherry Hill West girls soccer
Ogunsami is in her third year as the starting goalie for the Lions and has been named all-conference in her first two seasons. She will head to Vanderbilt next fall.

Maria Petrongolo, Gloucester Catholic girls soccer
Named first-team all-South Jersey as junior and second-team as a sophomore, Petrongolo is one of the top defenders in the area.

Sarah Furey, Bishop Eustace field hockey
Furey, who will move on to Duke, was third-team all-state as junior, when she had 11 goals and 24 assists and helped the Crusaders win the Group II state title.

Austyn Cuneo, Eastern field hockey
All Cuneo has done in her brief career is lead the state in goals in each of her first two seasons. The junior has already committed to North Carolina.

Amanda Lanciano, Haddonfield girls tennis
Lanciano posted a 40-2 record as a junior and had an 89-9 career record entering the season.

Victoria Martinez, Haddonfield girls tennis
Another star with the Bulldawgs, Martinez went 34-1 and is 111-3 for her career entering this season.

Ray Lawry, Kingsway football
A senior running back, Lawry rushed for 2,225 yards and 28 touchdowns as a junior. He has committed to Old Dominion.

Andrew OâNeill, Washington Township football
OâNeill, a senior running back, scored 11 touchdowns as a junior and was the Minutemenâs leading rusher. He was named second-team all-conference.

Gerald Owens, West Deptford football
Owens has rushed for 53 touchdowns over the last two seasons in leading the Eagles to back-to-back South Jersey Group II championships. He will continue his career at Michigan State.

Marquis Little, Williamstown football
A standout for the Bravesâ South Jersey Group V championship team in 2012, the senior running back/defensive back has committed to Old Dominion.

Joe Casaletto, Washington Township boys soccer
The senior forward had 10 goals and four assists as a junior and was second-team all-South Jersey. He helped the Minutemen win the South Jersey Group IV title.

Gavin Bright, Clearview boys soccer
Bright, a junior forward, broke out last season with 17 goals and four assists and was named all-conference. He led the Pioneers to a 14-5-2 record.

Tori Miller, Delsea girls soccer
As a sophomore, Miller poured in 20 goals for the Crusaders and was named first-team all-conference.

Brittany Reedman, Williamstown girls tennis
As a junior, Reedman won the Tri-County Conference Tournament and finished with a 29-3 record at first singles.