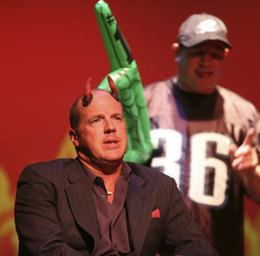 In the world of improv comedy, thereâs only one ruleâanything goes.

Steve Grande had a calling for the stage. The Pennsauken native was only 5 years old when he started performing in community plays. He graduated from Camden Catholic and became a theater major at Rowan University. He dove headlong into writing sketch comedy.

But something was still missing. He would scrutinize his scripts and second guess himself. It wasnât good enough. Then he discovered improv comedy. âIt was a stress reliever,â says Grande, 24. âYou donât have time to think about it. You just go with the flow and make good with what happens on stage. That suited me a lot better.â

And so Grande and two friendsâPatrick Bean and Pete Gigliottiâstarted Rowanâs first improv troupe, Second Place Champions. (A fourth member, Justin Schilling, joined after the trio graduated in 2011.) The professional group has performed on Broadway in addition to hosting its own comedy festival. SPC specializes in short-form games like Marshmallow Madness, where one of the members tries not to make the audience laughâand has to put a marshmallow in his mouth every time he does. At each show, a champion is crowned among the four performers. âWeâre best friends at this point,â Grande says. âWe know what someone is going to say sometimes before the other person knows. We can guess where theyâre coming from before they even get there.â

Those sturdy bonds are illustrative of South Jerseyâs highly devoted community of comedyâa scene that attracts fame seekers and workaday professionals alike. Inspiration for these performers isnât hard to find. Improv groups like Second City and the cast of Whose Line Is It Anyway? have found tremendous notoriety; sketch comedy shows like Saturday Night Live and Kids in the Hall became television standards; and mega-stars like Steve Carell and Tina Fey used improv and sketch comedy to launch their way to stardom. Whether pursuing a career or just a creative outlet, South Jersey residents find creative liberation through the art of comedy. âThe phrase I use is âtherapeutic joy,ââ says Eric Balchunas, founder of the sketch comedy group Iâd Rather Be Here.

For Balchunas, the seed of Iâd Rather Be Here was planted seven years ago when he moved back to Mount Laurel after living in Manhattan. (âReverse culture shock,â as he describes it.) He started journaling his observations about âSoJo,â which morphed into an idea for a sketch comedy show. He recruited some friends, found others from Craigslist and borrowed some video equipment. The first Wawapalooza was born.

Each year, he and the cast hatch new ideas, and the group just put on Wawapalooza 6 last fall at the Philly Fringe Festival.

The reason for Iâd Rather Be Hereâs success? The groupâs hyper-local approach, whether itâs sketches on Eagles fans and the Philadelphia Parking Authority or references to local landmarks like Route 38 or the Cherry Hill Mall. âYou can turn on the TV and get jokes about the president or pop culture figures on many different shows. But you really canât find local humor,â says Balchunas, who works as a financial analyst for Bloomberg. âSNL is never going to do an Eagles sketch. SNL doesnât know what Wawa even is. None of that exists [on TV]. What we found is thereâs some hunger for local stuff that people recognize.â Plus, by performing only a couple times a year, the group can mine their regular lives for material, meticulously tweak their scripts, and generate anticipation for each Wawapalooza. âIt makes it fun,â says Augustus Milligan, an original member and Cinnaminson resident, âbecause even though weâre in touch throughout the year, when we meet up and read the new scripts, itâs almost like a party.â

The growing local comedy scene, particularly in Philadelphia, is compelling many performers to stay in the region. Corin Wells, a Willingboro native, had become bored by acting and was seeking out a niche. She became revitalized when she started taking classes at the Philly Improv Theater. âI can honestly say that taking my first improv class was the best decision Iâve ever made,â says the 24-year-old.

She completed all four levels of classes at the theater and now belongs to two improv troupes that each perform two to three times a month. The groups do both short-form games and long-form performances; the latter is like a 25-minute play thatâs entirely made up. âThe ability to make people laugh is so rewarding,â says Wells, whose ambition is to do comedy full time. âAnd on top of that, having them laugh at something you made up on the spotâI canât describe the feeling.â

Of course, you donât have to have stars in your eyes to reap the benefits of comedy.

Tony Mahon studied theater in college and acted in his younger years. But the Jobstown resident eventually chose the insurance business over acting âbecause I didnât want to be a starving artist,â says the president of AJM Insurance Management. When Mahon joined Iâd Rather Be Here at its outset, it rekindled a love for performing and his original penchant for sketch comedy. Even better, it brought him closer to his daughter Alexandra, who performed in five of the annual shows before she went off to college this past fall. Says the 50-year-old Mahon, âI will say selfishly that having that experience with my daughterâher and I working together on scenes, running lines and doing the show togetherâit was a total father-daughter bonding experience.â

Enthusiastic crowds have kept Mahon and Iâd Rather Be Here coming back year after year. When it comes to improv, the participatory nature of the show and the high-wire act of making things up endears performers to the audience. Vegas Lancaster has seen both sides of the coin as a stand-up comedian and member of The N Crowd, which performs every Friday in Philadelphia. âIn stand-up, the audience hates you until you teach them not to, because they know you wrote all this stuff in advance â¦ and thereâs a whole culture of heckling stand-ups,â says Lancaster, a Cherry Hill native. âIn improv, since the audience knows youâre making everything up on the spot, theyâre a lot more on your side. Theyâre sitting there and watching and thinking âI could never do that.ââ

Of course, thatâs not entirely true. People every day take comedy classes and discover a love for performing. Improv isnât a far cry from the games of pretend that everyone played as kids. âItâs for people who like to have fun and donât mind being silly and wearing that silliness on their sleeves,â says Lancaster, 25. Plus, those performing skills have tangible real-world benefits; performers hone their ability to think on their feet and can discover a confidence they never knew before. âItâll be hard at first, but keep your self-confidence up,â says Grande, who has expressed interest in launching improv classes in South Jersey. âAnd really be comfortable with feeling stupid and letting yourself go. The more you let yourself go, the more opportunity you will have to find something creative that you never found before.â