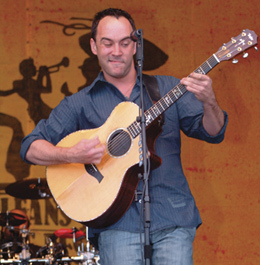 
by Editorial Staff--South Jersey Magazine
Star Power
If you love music but didnât make it to South by Southwest this year, spend a few days on the Dave Matthews Band Caravan instead. Jam band fans will get three days of Dave, plus performances by Guster, the Flaming Lips and O.A.R.âas well as local favorites including Dr. Dog and Cherry Hill native Amos Lee. June 24-26, Bader Field, Route 322, Atlantic City, DMBCara?van.com, $195 for three-day packages or $85 for single-day admission

All Access
Looking for a cheap thrill? You canât beat FUNday at Playland, where admission buys you access to Castaway Cove and supports Community Quest, which provides housing and employment services for veterans and people with disabilities. The all-access pass includes 30 rides, two mini-golf courses and go-karts. June 22, rain date June 24, 1 p.m. at 10th Street and the Boardwalk, Ocean City, (609) 646-0388, BoardwalkFun.com, $10

On With the Show
If youâre a film junkie, check out the Lighthouse International Film Festival, a three-day event featuring documentaries, family films and independent movies from the top festivals around the world. Screenings take place at venues across Long Beach Island. Attend panel discussions, meet film industry professionals and vote for your favorite films to win awards. June 3-5, LighthouseFilmFestival.org, $10 per film, $125 for a three-day pass

Kid Rock.
The high-energy rapper and singer is known for his over-the-top stage shows. If youâve been singing along to songs like âBawitdabaâ and âCowboyâ for a decade, nowâs your chance to catch the five-time Grammy nominee in action. June 18, 8 p.m. at the Borgata Event Center, 1 Borgata Way, (800) 317-1000, TheBorgata.com, $125.50

Peter Frampton.
Calling all closet Frampton fans. Itâs time to own your guilty pleasure and check out the multi-platinum classic rock legend on his 35th anniversary tour. Catch up on his recent work with songs from 2010âs Thank You Mr. Churchill, as well as favorites from his catalog. June 24, 9 p.m. at the Borgata Music Box, 1 Borgata Way, (800) 317-1000, TheBorgata.com, $75-$85

Eat Your Heart Out

It may not take much arm-twisting to inspire you to try one of the 40 great restaurants along the seven-mile stretch of Avalon and Stone Harbor. But the two townsâ restaurant week offers plenty of motivation, in the form of outstanding deals. Get breakfast for $9.10, lunch for two for $20.10 or a three-course dinner for $29.10 at favorite spots like CafÃ© Loren, The Sea Grill and Jayâs On Third. Check online for each establishmentâs level of participation. June 4-11, 7milerestaurantweek.com