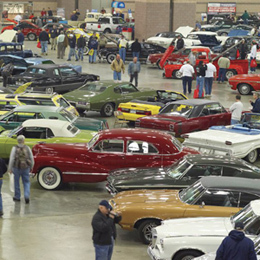 
by Editorial Staff--South Jersey Magazine
Start Your Engines If youâre the kind of wannabe yachtsman who refers to the passenger side of your car as starboard, nowâs your chance to fulfill all your seafaring dreams. The 2011 Atlantic City International Power Boat Show sails into town Feb. 2 to 6, with hundreds of new boats, including luxury motor and sailing yachts, sailboats and speedboats. The event features special guest Deadliest Catchâs Russell Newberry. Admission is $12 for adults, free for youth 15 and younger. If youâre more of a landlubber, check out the 2011 Atlantic City Classic Car Show & Auctionâthe largest of its type on the East Coastâwith more than 1,000 vintage cars for sale. Stop by Feb. 18 to 20 to browse rare classics, like the 1920 Rolls-Royce used on HBOâs Boardwalk Empire, and shop for hard-to-find car parts and memorabilia. Admission is $20 for adults, $5 for kids under 12. Atlantic City Convention Center, One Convention Blvd., (609) 449-2000, ACCenter.com

Enrique Inglesias
Get up close and personal with Latin superstar Enrique Inglesias as he brings down the house with his suave vocal stylings. Feb. 12, 8 p.m. at the Borgata Events Center, One Borgata Way, Atlantic City, (609) 317-1000, TheBorgata.com, $65