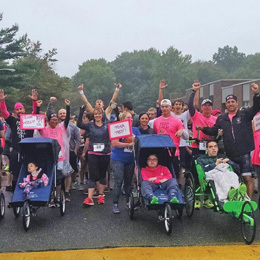 Whether he is pushing his son in a racing chair or out on the trail with a group of friends, one Voorhees man has discovered a newfound love of running.

Dave Goldstein, 49, began pounding the pavement in 2013 to drop a few pounds. “I think I was the only guy in my line of work to put on weight,” says Goldstein, a South Jersey mailman, making note of his wife’s excellent cooking skills. As his waistline grew, Goldstein reminisced younger, fitter days in the military. “I didn’t want to, but I knew I had to do something,” he says.

What began as easy exercise quickly turned into a passionate hobby for Goldstein. But he never imagined running would completely transform his life, create an unbreakable bond with his family and enrich the lives of an entire community.

“Looking back, my only regret is that I didn’t start sooner,” he says.

Goldstein is now the ambassador of New Jersey’s Ainsley’s Angels, a nonprofit organization that pairs runners with kids and adults who have disabilities.

A family man and father of three, Goldstein was inspired to join Ainsley’s Angels after witnessing its magic firsthand. His oldest son, Josh, 22, has Joubert syndrome, a genetic disorder of the brain.

“The way his face lit up while we were running together was all the inspiration I needed,” says Goldstein, who started the local chapter in December 2015. Since then, the father-and-son duo has completed several dozen races, including four marathons.

Goldstein isn’t the first father to compete and run with his disabled son. Perhaps the most well-known is Dick Hoyt.

Because of complications with his birth in 1962, Hoyt’s son Rick was diagnosed as a spastic quadriplegic with cerebral palsy. According to a CBS interview, Hoyt remembers the advice of doctors who suggested his son would essentially be non-functioning, and that he should place him in an institution.

Hoyt refused, and instead brought Rick home with the intention of giving him a full and rich life.

Over the next three-and-a-half decades, the pair set, achieved and surpassed not only their own goals, but also everyone’s expectations of a father carrying, towing and pushing his wheelchair-bound adult son. They completed more than 1,000 races, including marathons, duathlons and triathlons. Additionally, the Hoyts biked and ran across the U.S. in 1992, completing a full 3,735 miles in 45 days.

After hearing their story, Goldstein contacted the Hoyts about a racing chair for Josh.

“They recommended I reach out to Ainsley’s Angels,” he says.

Ainsley’s Angels has more than 70 chapters across the country. The organization was named for Ainsley Rossiter, the daughter of U.S. Marine Major Kim “Rooster” Rossiter and his wife, Lori, who was diagnosed in 2007 with infantile neuroaxonal dystrophy, a rare and terminal illness that slowly causes paralysis.

Most children with this diagnosis die before reaching 10 years of age. To cope with the inevitable, the Rossiter family turned to running. Lori Rossiter described it as a “therapeutic outlet” during a time of tremendous sadness.

“Ainsley’s smile on the race course, the positive energy surrounding the start line, the other riders and runners smiling from ear to ear, the togetherness of every member preparing to ‘roll with the wind,’ the fearlessness of the athletes, the normalcy of the families, and the love everyone shares, it’s all been therapy like no other,” she wrote on Ainsley’s Angels of America’s official website.

Ainsley Rossiter died at the age of 12, shortly after completing her 100th road race. In addition to the creation of Ainsley’s Angels of America, she inspired Born an Angel, a children’s book written by her sister Briley Rossiter, and the Ainsley’s Angels Race Series.

After connecting with Goldstein, Ainsley’s Angels helped the South Jersey father raise more than $5,000 for a custom-built chair. The bright green racing chair was to be presented to Josh and his father at the 2015 Marine Corps Marathon in Washington, D.C. on one condition; Goldstein had to push his son in the marathon.

“I was nervous because I wasn’t sure if I’d be able to do it,” Goldstein says. “I had been training, but not for that.”

Goldstein finished the 26.2 miles in 4 hours and 20 minutes, a personal best.

A week later, he was contacted by Kim Rossiter, president of Ainsley’s Angels, to start a chapter in South Jersey.

“Starting a chapter was never my intention—I just wanted to do this for Josh,” he says. “But I realized it would allow me to give other families what Ainsley’s Angels gave us; freedom, normalcy, happiness. There was never any hesitation. I knew I had to do it.”

Lesley Hall and her daughter, Holly, 5, have been with Ainsley’s Angels in New Jersey since the chapter’s first race. Holly suffers from an STXBP1 gene mutation that causes multiple disabilities including epilepsy and health issues. She uses a wheelchair and is non-ambulatory, but loves to move.

“Dave came all the way to our house [in Salem County] to give Holly a test ride to see if she would like it, and not to our surprise, she did,” Hall says.

Despite her young age, Holly suffers from extreme anxiety. Her parents show her a daily schedule and special calendar to help her know what to expect for the day, and the days ahead.

“When she sees her little Ainsley’s Angels symbol on the calendar, she has the biggest smile,” Hall says. “She looks forward to the races.”

On race days, each rider is given custom merchandise and a chair adorned with their name on a flag so spectators can easily cheer them on.

“Holly loves it when people clap and call her name,” Hall says.

Kayin “Kai” Dakhari, 10, finished his third half marathon on Sept. 17. The race marked his ninth as an Ainsley’s Angels rider.

Kristen Connor and her family joined the team last year. Her daughter, Brynn, 6, has Rett syndrome, a rare genetic neurological and developmental disorder that affects the way the brain develops, causing a progressive inability to use muscles for eye and body movements and speech. So far, Brynn has completed six races.

“Ainsley’s Angels has given Brynn a special activity to participate in that’s just for her,” Connor says. “We have met amazing, wonderful families in the process. We’re grateful for it, and for Dave.”

Since 2016, Goldstein has raised thousands of dollars for the chapter through fundraisers, networking, local donations and corporate sponsors. His efforts have been able to procure 10 certified racing chairs, in addition to a custom-built trailer that will house the chapter’s merchandise and serve as an official meeting spot for future races. Currently, there are 22 riders and more than 150 runners involved with the South Jersey chapter. Goldstein is always looking for more participants, especially riders, and hopes to eventually expand into the Greater Philadelphia area.

Although Ainsley’s Angels keeps him busy, Goldstein still finds time for running. Since his journey began in 2013, he has completed nearly 60 races, including four triathlons.

He enjoys time spent with his Voorhees running group, affectionately called “The Minions,” that he helped form in July 2016. The group motivates, inspires and keeps each other accountable for training. However, Goldstein’s favorite runs are always with Josh.

“It’s an incredible feeling to be able to bond with him over something that brings us both joy,” he says.

The rest of the family has also joined in on the hobby. Goldstein’s wife, Susan, recently completed her fifth half marathon and the couple’s middle child, Ryan, 17, finished his first 5K run last year. The youngest of the family, Jessica, 8, attends every race and acts as the Goldsteins’ honorary cheerleader.

“When we received Josh’s diagnosis, life almost felt over for us,” Goldstein says. “It has been hard but we’ve made it work, together, as a family. The disorder took so much from us, but running gave a lot of it back.”

For those interested in becoming an Ainsley’s Angels runner, or for more information on signing a loved one up to ride, contact Dave Goldstein at South- Jersey@AinsleysAngels.org or visit the Ainsley’s Angels in New Jersey Facebook page at Facebook.com/AAInNewJersey.