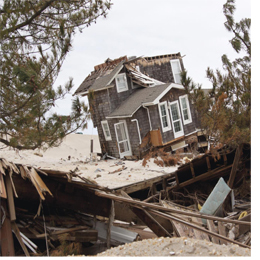 In the first days after the devastation following Superstorm Sandy, all Phil Befumo could do was wait.

Befumo and his wife, Carolyn, who own a vacation home in the Surf City section of Long Beach Island, were not permitted to return for the first 10 days after the massive storm decimated parts of the South Jersey coastline and left countless homes waterlogged and damaged. While they waited, three feet of bay water did its work inside their rancher.

“That salt water set in there for 10 days,” recalls Befumo. “When we got in there, it was no place you would want to be. Crayon literally fell off the kids’ pictures on the refrigerator.”

Befumo is quick to admit his family is one of the lucky ones. Carolyn Befumo works in the insurance industry and knew the ins and outs of filing a claim. Thanks in part to her connection with a builder, their home was razed and rebuilt within one year. Today, the home sits 12 feet off the ground—better protected, Befumo says, for when the next big storm hits, adding that he has no regrets about buying a home along the coast.

“We’re extremely happy to be where we are and have that place there,” Befumo says. “We always knew that there was a risk [of flooding]. We just never thought that the water would come from the bay—never even imagined that.”

It’s been nearly five years since Superstorm Sandy, the deadliest and most destructive hurricane to strike the South Jersey Shore region, which first made landfall near Brigantine with record winds and rain, bringing with it tidal flooding that ripped homes off foundations and dumped several feet of sand in the streets. In the aftermath, the South Jersey coastline was reformed—according to a 2012 survey by Stockton University’s Coastal Research Center, New Jersey’s beaches were on average 30 to 40 feet narrower after the hurricane.

Rather than relocate, many residents have opted to regroup and rebuild— and raise. Today, drive through towns like Ocean City, Stone Harbor and Avalon will reveal former ground-level homes, like Befumo’s, now high off the ground.

“We’ve implemented new ordinances lifting properties and agreed upon elevations from 10 to 11, to 12 feet,” says Wildwood Mayor Ernie Troiano. “[The storm] actually was a wake-up call, showing us what could possibly happen.

We saw what happened with an indirect hit. We can only imagine what will happen with a direct hit. And we’re trying to get as many of the lowlying
properties up as we can.”

The moves are being made to comply with emergency amendments to New Jersey’s Flood Hazard Area Control Act, which sets minimum elevation standards for the reconstruction of houses located below base flood elevation levels.

Along the coastline, costly construction projects for new berms and dunes—despite the protests of some vocal residents— are now just getting underway. The Army Corps of Engineers is beginning a beach replenishment and dune building project in Ventnor and Margate this summer, and a similar project in Longport will begin in the fall.

“What Sandy got started was a lot of conversations about dunes,” Troiano says. “We’re getting them [in Wildwood] whether we like it or not, and like I’ve said, I understand they’re concerned about a direct hit. But our biggest concern is our back bays. The back bay is, to say the least, our bigger problem.”

“In Long Beach Township, we’re back and we’re better than we’ve ever been,” says Mayor Joseph Mancini, a vocal proponent of the dunes project. “Our beaches have never looked better.”

Still, Mancini concedes the dune project is not enough.

“It was never designed, nor built, to be a stop-gap for 20 years,” Mancini said. “This job was approved by Congress for a 50-year period. In our agreement, the Army Corps will be coming back when, A. there is a large storm that cuts into it, or B. every six years, coming back to dress it up back to the original template. Each time that happens, it has to be funded. And that’s my concern.”

While raised homes and dune projects may serve as a short-term answer, some experts caution that, without additional planning and preparation, like preparing for rising sea levels or future storm surges, more trouble will follow the next devastating storm.

“We haven’t learned the lessons of Sandy yet,” Tittel said. “We ended up rebuilding boardwalks at the same height as they were when they got struck by Sandy. We put an amusement pier back at the same height as it was when it got struck by Sandy in Seaside Heights. And I think the concern is that as people's memory fades, they start to forget how devastating it really was, and how they put their families at risk.”

The state’s solution of “pumping more sand on the beach,” Tittel says, does not deal with the real problem. “In fact, that makes it worse for the back bays,” Tittel says. “Our failure to even really talk about sea level rise, let alone even grapple with it, is critical.”

Another issue is land use. Michael Greenberg, professor at the Bloustein School of Planning and Public Policy at Rutgers University, says storms like
Sandy should force some uncomfortable conversations about who should be building on the increasingly vulnerable coast.

“With storm damage, it’s very hard to control that problem without saying, basically, a lot of the Shore isn’t going to be available for housing anymore,” Greenberg says. “It will be available for golf courses and open space and other things where, if there is a huge wave, fewer people will get hurt. That’s really the solution.”

“You have to ask yourself, does the state want to do that?” Greenberg says. “Do they really want to take control of this land, and if so, what are the implications for people who currently own the land? It’s a really tough situation.”

With such conversations unlikely to happen anytime soon, Greenberg is pushing for better emergency planning to minimize threats to public health. Cross-training needs to take place with people in both planning and public health, he says.

“Historically we’ve had a very good relationship between urban planning and public health people,” Greenberg said. “There is a lot of talk about how planners made land use decisions, and should be working more with public health people. It’s the idea of getting people out of harm’s way to start with, instead of saying ‘Oh, could we have prevented that?’”

On the positive side, Tittel notes, most South Jersey Shore homeowners want to do the right things—and he has seen progress.

“We see a lot of people along the coast not only elevating houses and moving them back, but moving toward clean energy,” Tittel says. “South Jersey is a unique and wonderful place, and we need to do more not only to help protect [the Shore], but to ensure a healthy and sustainable economy. We have that future in front of us.”