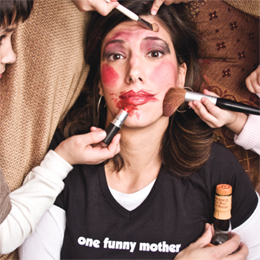 I consider myself pretty laid back. I can listen to two dogs barking and running through my house while my daughter cries about her deodorant, my son sings Broadway tunes and my youngest daughter sprains her ankle on her balance beam, all within five feet of me. It actually takes a lot for me to say, “Enough is enough.” I’m not usually one to take up my pitchfork or be political.

I find that humor, in its simplest form, is the best way to bring people together, and I’m drawn to that. Sometimes, though, there are moments in your life that you realize you must speak out and do something. My life is pretty simple right now. I’m touring my off-Broadway show One Funny Mother around the country, I created a new board game called “Chardonnay Go,” and I recently started hosting corporate conferences around the globe. It’s been a lot of work, but I’ve met amazing people and visited beautiful places. However, one thing has struck me during my journey. In many ways, I’m at the pinnacle of my career. I’m a writer/producer, inventor, comedian and mom, standing on these massive stages, in my fancy outfits (that I got on sale at Lord and Taylor with a coupon), exchanging ideas with CEOs and presidents of something or other, and yet, when I step back for just a moment to take it all in, I realize that I’m the only woman on the stage. Me. The comedian. Where are all the female execs? Where are all the women missing dinners and baseball games to move themselves and the female movement forward? I don’t see them anywhere, and it’s not OK.

I’m 44 years old and I remember growing up being told, “You can be anything you want to be.” And lucky for me, I’m doing exactly what I’ve always wanted. But where are all the women whose dreams were to conquer the business world? Where are the women whose eyes I should be glimpsing into across the stage and giving a knowing nod to say, “Nice to have you up here!” or, “You made it to the big stage!?” I know these women exist. I’m friends with many intelligent, accomplished women, but why are they not on stage with me … next to me? Why is it that at the highest levels of corporate America, all I see are men? Nice men. Lovely men. Men who also think that there should be more women on that stage and yet the numbers are the numbers.

While I’ve been noticing this trend on stages across the country, I’m also in the throes of raising a 15-year-old daughter (thank you for the prayers). I encouraged her to join the debate club or to be bold and run for an office at her high school, but it’s just not her thing. She’s tried volleyball: liked it. Baseball: she quit right after I bought her all the equipment. Theater? She loves! Public speaking? Sadly, there is not really a place that young women can go to learn how to speak in public. It’s not mandatory in high schools, and that environment may not be the most conducive to teaching young women how to speak.

I could do my part and start teaching classes for female execs, but is that enough? If we haven’t amply prepared our own generation of women to take and command the stage, then why would we expect it to be different 10 years from now? In the last few years, there have been amazing initiatives to teach young women to “Be Bold” and empower them to use their voices, but are we really teaching them the skills they need to do it? It’s one thing to tell them to use their voices, but in a room full of men, sometimes being the loud, lone female voice in the room is a lot harder than you think.

I’ve been that girl. I’ve been the only woman in a room of men trying to speak my truth through comedy. Sometimes, I was amazing and other times I failed miserably and didn’t help our cause in any way. But I did learn something. I learned how to not do it. I learned how to not get my point across. I learned how to make a mistake, look like a fool, pick myself up and try again. I’d like to see that kind of training for young girls. I want to teach young girls that it’s OK to make a mistake. It’s OK to not be perfect. It’s how you recover and move on that matters. I don’t want to start another empowerment group. There are so many great organizations doing great work. I want to teach girls through stand-up, improv and games how to address an audience, not with a speech that relies on reading words, but instead teaches them to be in the moment, trust themselves and be OK with failing. You show me a girl who is fearless, and I’ll show you a girl who can get on a stage and speak her truth. I believe that you can teach young girls to be fearless. As a mother of a daughter with paralyzing anxiety, I don’t use these words lightly. I know that these classes won’t turn every young woman into a fearless wonder, but any improvement is an important move forward.

I learned how to speak by getting on stage every week at open mics in South Jersey and Philadelphia. I want to create a class for young women here in South Jersey, and I’m putting it out into the universe now. I need help. I’m looking for other women, corporations and moms who want to give their daughters the skills to have a voice, to be a part of an advisory board to craft this nonprofit into chapters, to help young women across the country one day. If you are a corporation who would like to sponsor a program like this, please contact me.

Sometimes, there are moments in your life that you realize you must speak out and do something. This is me, speaking out; if you’d like to help me do something about it, email me at dena@denablizzard.com.

Comedian Dena Blizzard is a married mother of three, a former Miss New Jersey and the writer, producer and star of the Off Broadway hit show One Funny Mother. In her free time she folds laundry, is a carpool mom and has created a dirty board game called “Chardonnay Go, For Wine Lovers, Moms and Other Shameless People.” Find Dena at Facebook.com/DenaBlizzard or at The Cheesecake Factory.